Museum of history of Yerevan 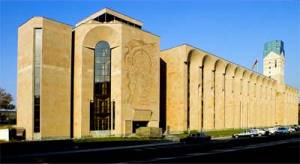 In 2005 the museum settled in the newly built building of the City Hall of Yerevan, which represents an integrated architectural complex. Thus, after a long journey, substantially and firmly, deservedly and with full right, the museum settled in the new building, constructed according to the creative thought and talents of the architect Jim Torosyan: the building conforms to the fame and rich collection of the museum, collected values and the ancient history of the city.
Over 89700 items are housed today in the Museum of History of the city of Yerevan, which present material and spiritual culture of the capital from ancient times to this day/ our time.
There are archaeological, ethnographical, numismatic, fine art, written sources, photographic and other collections kept in the museum, which tell about the past and present of the capital and its citizens. Three scientific and exhibition divisions function in the museum, which since the first day of foundation have collected, studied and exhibited items elucidating the history of Yerevan.
A scientific council functions associated with the museum. Greatest thinkers and artists of their times were among members of the council: the architects Al. Tamanyan, T. Toromanyan, N. Buniatyan, M. Mazmanyan, the painters M. Saryan, G. Gyurjyan, Taragros, the sculptor A. Sargsyan, the scientists St. Lisitsyan, E. Shahaziz, S. Barkhudaryan, B. Arakelyan, T. Hakobyan and others.

Man lived in the territory of Yerevan even in prehistoric times. Fresh water of the river Hrazdan, soft and warm climate created favorable conditions for life and its development: the eloquent proof of this are various ancient tools found in the Yerevan cave, the age of which is assessed to be more than 100 thousand years.

One of most ancient and well known fenced settlements of Western Asia, the settlement Shengavit, dates back to the 4-3-th millenniums B.C. Cultic hearths with ornaments and statuettes, two-color black and red polished pottery, millstones, remnants of cereal crops found during archeological excavations are kept in the museum. Yerevan is the 12th capital of Armenia. It was founded by the king Argishti the First in 782 B.C. and was named it Erebuni, the sounds of which were then alternated and its name became Erevan. Frescoes, cuneiform records and many other items kept in the museum are conclusive evidence of the rich ancient history of the city.
Ceramic vessels for beer, found during archaeological excavations in Karmir Blur, stand out in the collection; they testify that even in the 7th century B.C. Armenians drank beer, which was later confirmed by the Greek historian Xenophon. The settlement of Karmir Berd dates back to the 1st millennium, where a rich archaeological collection was found: bronze belts, ceramic vessels, stone idols, arrowheads, knives, jewelry and other items. The items excavated in the ancient settlement Avan-Arinj represent the Hellenistic culture of the city.

Iron gates of destroyed churches, frescoes, ritual vessels, curtains, a bell (1962), а 13th century model of the church Katoghikeh and other relics are kept in the museum.
The families Melik-Aghamalyan, Geghamyan, Afrikyan, Ter-Avetikyan, Yesapyan and other made a valuable contribution to the management, development of trade and industry of the city; items presenting them are included in the collection of the museum. In 1834 the Russian emperor Nikolay the First granted a golden clock to Melik-Aghamalyan's family (kept in the museum) in recognition of the substantial assistance provided to the Russian army in the course of the Russian-Persian war.
Letter-melting and printing machines are of big interest and stand out among the collection items of the museum, and they have also interesting history of origin. Mkhitaryans founded in Vienna a printing house and a separate letter-melting workshop, where new samples of letters for Armenian, Latin and other languages were cast. Mkrtich A. Khrimyan (Khrimyan Ayrik) acquired the letter-melting machine from Mkhitaryans and used in the printing house of Varaga Vank. Later it was moved to Ejmiadzin, and was operated in the printing house N1 of Yerevan during the soviet period. In 1960 the machine found its refuge in the museum of history of Yerevan. The printing machine has made a similar journey; it was used for printing of the newspaper “Khosq” under the editorship of Arshavir Melikyan.
By efforts of the famous painter M. Saryan, P. Terlemezyan, S. Arakelyan and G. Gyurjyan an exhibition dedicated to Yerevan was organized in the yard of the Museum of History of Yerevan in 1938; after its closure the exhibited works were granted to the museum, thus enriching its collection of fine arts. Besides high artistic value, these canvases have big documentary significance.
The collection of stamps of the museum contained in several albums was published during the years of the First Republic. The stamps are of high artistic value and reflect the centuries-old culture and spiritual life of our nation (painter - Arshak Fetvachyan). The stamps were printed in Paris. Haik Gavukchyan's collection of stamps, who was a great expert-philatelist and a devoted citizen, was awarded a bronze medal on the exhibition of philately organized in New York in 1936.
Later on these stamps were granted to the executive committee of the city council of Yerevan, which transferred them to the museum of history of Yerevan. The museum is an entertainment place for people of all ages, occupations and preferences.
The work experience with visitors of the museum has gained a new application in these latter days. The connection between schools and the museum continues: it is maintained and developed gaining a new spirit and contents.
The museum is in permanent connection with both old-timer citizens of Yerevan and the young generation. The list of publications authored by employees of the museum enlarges year after year.
Open the door, come in, mix your existence with the golden dust of the past, present and future history of your city, live, let the pride liven up in your heart for that your are just Armenian, a citizen of Yerevan…