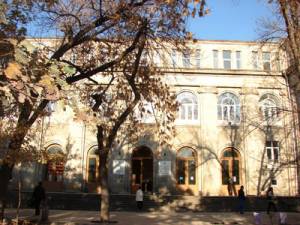 Armenian National Agrarian University (former Armenian State Agrarian University) is one of the largest HEIs of the republic and is the only educational establishment providing education in the agrarian sphere. As the Armenian Agricultural Academy it was formed in 1994 as a result of merging of Armenian Agricultural and Economical Institute and Yerevan Veterinary Institute which since the day of their foundation (1930) played an important role in the development of agriculture of the republic and other republics of the former Soviet Union.
The educational system of the ANAU includes 7 faculties with daytime studies (agronomy, foodstuff technology, agrarian engineering, veterinary medicine and sanitary expertise, agribusiness and economics)
The ANAU governance bodies are the Board of Trustees, the scientific council and the Rectorate. The bodies of self-governance are the student council, student scientific society, the trade union and alumni union.
The university has highly skilled teaching and scientific staff. Of 637 lecturers 64 ones are doctors of sciences and 310 PhDs. Armenia adopted the law on the higher and after-university education (January 2005) according to which ANAU passed the three-level system of education. Generally the university provides education in 36 specializations, 26 of which are provided in a distant form as well.
The Zoological museum of the university is among the best ones in the CIS region. The collection of ANAU history museum includes rich documentary materials about the foundation of the university.
The union of educational and experimental entities “Balahovit” and “Voskehat” presently has the land of 1077 hectares where students, post-graduates and researchers carry out educational and research projects.
For more information visit www.anau.am