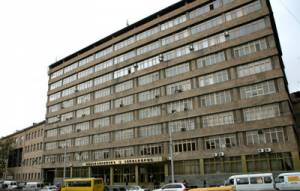 Pedagogical Institute was founded on November 7,1922 and Since 1948 it has been bearing the name of the great enlightener and educator Khachatur Abovyan. In the first year of its foundation the institute had 3 faculties, a few dozen students and teachers.
In 1923 the HEI gave the first alumni with three-year education. Later the institute was joined to the university, then separated, reconstructed, undertook a number of changes. In the academic year of 1932-33 the institute had 5 faculties. Prior to the World War II new faculties opened and full time and distant form of education was provided.
In 1944-45 the faculty of Nature Sciences was re-opened. In the academic year of 1946-47 there were already 1034 students studying at the six faculties of the institute. In 1948-49 the faculty of Psychology and Logic was added which functioned till 1955-56. In 1956 new departments were opened, the faculty of Psychology was reconstructed, the faculty of Pedagogy with school and pre-school departments was founded, workshops of wood processing and metal processing as well as a laboratory for automobiles and agricultural machinery were created.
In 1957 the psychology problems laboratory was opened adjunct to the institute.
Today the university has 10 faculties, more than 50 chairs.It prepares high-quality specialists in accordance with modern requirements not only for the Armenian educational centres of Armenia but of Artsakh and Diaspora as well.