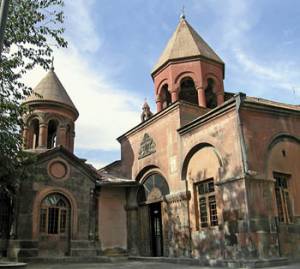 The Holy Mother of God Zoravor is one of the oldest churches. First it was called Holy Mother of God as there was kept the marvelous “Zoravor” bible. The church was in Shahar quarter of old Yerevan. The chapel and mausoleum of St Anania apostle was in the church and it considered to be a sanctuary. Due to the financial assistance of Yerevanians, patriarch Movses Syunetsi built a church complex consisted of the church, the chapel, cells for monks, the patriarchal residence. It was also surrounded with walls. A theological school was founded here as well. The church was built under Philip Catholicos (1632-1635), however the it didn’t exist for a long time. It was destroyed during the earthquake of 1679. The present-day church was built in the same place, in 1693 due to the donation of the Yerevanian wealthy man Khoja Panos. In the record of 1793 it is mentioned that the St Zoravor church was renovated by the centurion Gabriel under Catholicos Ghukas.

In the Soviet period, after serving different goals, The Holy Mother of God Zoravor church was returned to the worshipers and started working. Confirmed by the Holy Mother See, in 1974-1978 the church was repaired, the ground was tiled with marble, a place was constructed for the choir and a new building was constructed for the clergy. St Anania chapel was renovated as well.