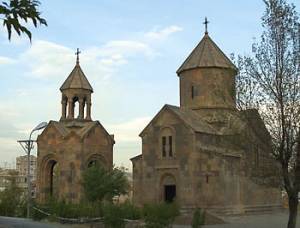 In 1927 refugees from  Melitene (Malatia) of Little Hayq came to Armenia. They established a living quarter at one of the outskirts of Yerevan and named it New Malatia.

In the 1960s a memorial park dedicated to the victims of the Great Genocide of 1915 was laid in Malatia quarter of Yerevan. Later Holy Mother of God Church was built nearby which resembled the main church of historical Melitene (Architect Hrachya Gasparyan). During the construction of the church some soil brought from Malatia state of Little Hayq was mixed with the mixture used in the construction of the walls.

The construction started in 1991 and was dedicated to the heroes fallen in Artsakh battle and to the Armenians of Malatia massacred during the Genocide. The construction was blessed by All Armenian Catholicos Vazgen I. The initiative belonged to the head of Malatia district of that time Vahan Zatikyan. The church has been working since 1998.