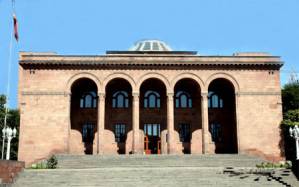 Armenian Academy of Sciences (since 1993 - the National Academy of Sciences of the Republic of Armenia) was founded on 10 November 1943 on the basis of the USSR Academy of Sciences' Armenian Branch, which had been working since 1935.
One of the founders and the first President of NAS RA was Full Member of the USSR and Armenian Academy of Sciences Prof. Hovsep Orbeli. During 1947-1993 the President of NAS RA was Prof. Victor Ambartsumian, Full Member of the USSR and Armenian Academies of Sciences. During 1993-2006 the President of NAS was academician Fadey Sargsian. Since 2006 the President of NAS RA has been academician Radik Martirosyan.
NAS RA is a highest state scientific self-governing organization which unites NAS Members and scientific staff of affiliated scientific and research institutions. The Academy promotes and carries out fundamental and applied research in different scientific fields, as well as coordinates research carried out throughout Armenia. NAS RA is an official scientific consultant to the highest Governing Bodies of Armenia.
NAS RA is mainly financed from the state budget. Additional finances come from different state and private foundations, as well as from direct contracts between the Academy and other organizations in Armenia and abroad.
As a state scientific organization NAS RA unifies the scientific and research institutes, subsidiary services and governing body - the Presidium of the Academy includes 34 scientific organizations.
The Presidium of NAS RA has five scientific divisions in particular fields of science:
• Division of Mathematical and Technical Sciences,
• Division of Physics and Astrophysics,
• Division of Natural Sciences,
• Division of Armenology and Social Sciences,
• Division of Chemistry and Earth Sciences.
Several Institutes have experimental plants, special design bureaus, botanical gardens, etc.
The Presidium of NAS RA also includes Fundamental Scientific Library, Scientific Information Center, International Scientific Educational Center, "Gitutyun" Publishing-House and subsidiary services.
Within the Presidium there are scientific Commissions and Councils (Publication's Council, Computing Technology Application Commission, International Scientific Collaboration Council, Expert Commission on protection of Lake Sevan) and Councils on particular scientific area in every Division.

The Governing Body of NAS RA is the General Meeting of the Academy including all Full Members (academicians), Corresponding Members of the Academy, Directors and authorized representatives of the Institutes. Between the General Meetings the Academy is being administered by the Presidium composed of 11 members:
The President of NAS RA, the vice-president, secretary-academicians accomplish the general and current governing of the structure.

The Academy has a staff consisting over 3700, among which there are 63 academicians, 51 corresponding members, 335 doctors of sciences, 1080 candidates of sciences. It has 4 Honorary, 111 Foreign members and 55 Honorary doctors.
Members are elected at the General Meeting held as a rule once 3 years.

NAS RA has scientific collaboration agreements with the Academies of Russia, Georgia, Belarus, Ukraine, Turkmenistan, Hungary, China and the Royal Society of Great Britain. Affiliated scientific institutions maintain wide international linkages and co-operation with scientific institutions and universities of the USA, Germany, France, the Netherlands, Israel, Iran, Cyprus, Mexico and other countries.
The scientists of NAS RA participate in scientific programs of many international foundations and other organizations.

The building of the Presidency of NAS RA

The building was projected by the famous architect Samvel Safaryan. The construction was over in 1955. Later together with the architect M. Manvelyan S. Safaryan projected other buildings adjacent to the central building of the Presidency of NAS RA, creating an attractive architectural complex. A simple but impressive complex looks out towards Baghramyan avenue. The composition looks festive due to wide front stairs which lead to the Presidency building projected in a simple geometric shape. The front part looking at the avenue is made with a solemn arcade decorated with sculptures. The hall, the lobby, the corridors and the Assembly hall of the Presidency building are made in a modest but artistic style. The side walls of the hall are masterfully decorated ( artist-V.Khachatryan). With the sgraffito technique, using the tuff cover as a background, famous sons of Armenian people are portrayed there (Mesrop Mashtots, the enlightener and Movses Khorenatsi, the historian). The NAS RA complex was created in the same style as other works of the author: the second House of the Government in Hanrapetutyan square, Yerevan State Medical University, Byurakan Observatory and other buildings. All significant events of NAS RA are traditionally held in this building.