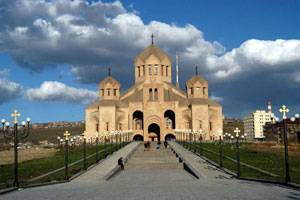 St Gregory the Illuminator church was built by the initiative of the All Armenian Catolicose Vazgen I and was dedicated to the 1700th anniversary of the Christianity adoption in Armenia. The Patriarch personally placed a memorial stone in the place of construction of the church. The blessing ceremony of the church was performed by All Armenian Catolicose Garegin A in 1997 on the day of the Virgin Mary Annunciation feast, on April 7. The church was built by architect Stepan Qyurkchyan's project. It is a church complex comprised of three churches: Mother See, St King Trdat and St Queen Ashkhen chapels. A bell tower with more than 300 columns and a dome were built in front of the church. The remains of St Gregory the Illuminator are kept in the dome. The remains were brought by Garegin the Second in 2000 from St Gregpry the Armenian church in Naples. There are special halls for the receptions and on the ground floor of the church. The draft of the ground has the form of a cross and a facetted dome. It is the largest church among all Armenian churches. The total area of the complex is approximately 3.822 sq m and the highest point is the cross of the church which is 54 m from the ground. The complex is mainly built of monolite iron and concrete and faced with the light orange tufa from the historical capital of Armenia- Ani. With its magnificent look it is seen from many parts of the capital. The church was built by eminent mecenates Alec and Mary Manoukyans, their son Richard and daughter Luiz Simone Manoukyans. The chapels of St Trdat and St Ashkhen were built due to the donations of Nazar and Artemis Nazaryans, Gevorg and Linda Gevorgyans, and the bell tower was built by Eduardo Ernekyan's donation.