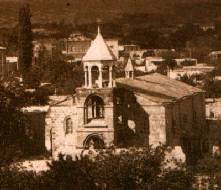 The St. Poghos-Petros Church was situated in the Shahar District in Yerevan. The church was completely demolished in the 1930s by the decision of the Soviet authorities and the present cinema "Moscow" was built in the same place. According to some information, the church was one of the oldest churches in Yerevan that was built in the V-VI centuries. On the remains of the church, which were preserved on the eastern part, a new one was built after the disastrous earthquake in 1679, probably at the end of the XVII century.

The church, which carried the names of the Saint Apostles Poghos and Petros, belonged to the domeless, triple-nave basilica type of churches.
There was the chief altar with a couple of sacristies in the eastern part of the large prayer-hall. The prayer-hall had entrances form the southern, western and northern sides. The walls beside the chief altar were covered with six strata of frescos made in different ages. When the church was demolished the frescos were taken down and transferred to various museums.