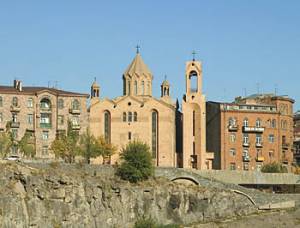 Standing up on the upper part of Dzoragyugh Village and facing the old Yerevan fortress on the left bank of the River Hrazdan, a hermitage-monastery was functioning since the earliest Christian era. This spacious complex, surrounded by a high, fortified wall, was made up of the St. Sarkis, the St. Gevork and the St. Hakob churches, of the buildings of the patriarchal offices and school, of an orchard and of other buildings.
The St. Sarkis Church was the official seat of the Patriarch, whereas the monastery was the patriarchal inn for the guests.
The St. Sarkis Church, together with the hermitage-monastery, was destroyed by the big earthquake of 1679. It was, however, rebuilt on the same site during the rule of His Holiness Edesatsi Nahabet Catholicos (1691-1705).  The present St. Sarkis Church was rebuilt once again during the period 1835-1842.
With its interior and exterior architectural features this church was the least good-looking among all the churches of the Old City of Yerevan. Its unsightly look did not correspond to its significance as the seat of the Araratian Patriarchal Diocese. During the rule of His Holiness Vazken I Catholicos of Armenians, the church underwent basic renovations and improvements. Based on a plan drawn up by architect Rafayel Israelian in 1972, the reconstruction works of the St. Sarkis Church began and the character of the old building of the church was basically preserved. The faç¡¤e was covered with Ani orange tufa rocks and engraved with of triangular niches. After R. Israyelian?s death, the construction works were taken over and continued by the co-author, architect Ardzroun Galikian. During the years 1971-1976, the interior look of the church was significantly improved. On the eastern part of the church, a gallery was added for the church choir. As a result of such additions, it was found necessary to remove the old dome and the old drum and to replace them by a much higher dome with polyhedral fan-shaped spire. The construction of the bell tower of the St. Sarkis Vicarial Church was completed in 2000.
The rebuilding of the St. Sarkis Church was made possible by the donation of the benefactors Sarkis Kurkjian and his children, residing in London.