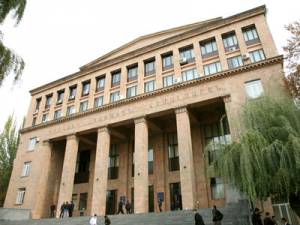 On 1919, on the 16-th of May, the RA Ministers Council made a decision to found a university in Yerevan. This was realized on the 31-th of January in 1920 in Alexandrapol's (now Gyumri) trade school.
A gorgeous ceremony was celebrated where the government and guests from abroad were present. The lessons in the university started in February of 1920. The first lecture was held by an outstanding scientist Stepan Malkhasyanc.
In the beginning there was only one faculty, that of History and Linguistics, 262 students and 32 lecturers. Owing to great efforts of the first rector of YSU, Yuri Ghambaryan, an experienced staff from abroad having great pedagogical and scientific experience was invited to work in YSU. Among them the names of Hakob Manandyan, Manuk Abeghyan and Stepan Malkhasyanc should especially be mentioned.
In 1920 Armenia became a part of the Soviet Union. On the 17-th of December, the first national commissioner of education of the ASSR, Ashot Hovhannisyan, declared about "The new order of the university reformation", according to which it was to be renamed into Yerevan National University. The above said was realized by the next rector professor, Armenologist Hakob Manandyan.
In the 20s of the 20-th century, the university was located on Astafyan (now Abovyan) Street on the first floor of the teacher's seminary. The National University had 2 faculties; those were Departments of Social Sciences and Biological Sciences. And in 1921 there were already 5 faculties, namely the Faculties of Biology, Oriental Studies, Technical Studies, Pedagogical and Soviet Industry. Later, the Biological Faculty was transformed into Agricultural. In March of 1922 a Medical Faculty was also founded.
According to the government decision of 20.10.1923, the National University was renamed into State University. Therefore, the responsibilities and the status of the university became higher, and at the same time the requirements became more complicated. Experienced lecturers from abroad with knowledge of several foreign languages after a thorough election by the authorities of the university were invited to work.
In 1933-34 Faculties of Economy, History, History and Linguistics, Physics and Mathematics as well as Pedagogical Faculty started to function. In 1934 the Pedagogical Faculty was separated from YSU and a new pedagogical institute was founded which was later renamed after K H. Abovyan. In the same year the Biological Faculty was divided into 2 branches - Faculties of Biological and Chemical Sciences.
Thus, in 1935-36 8 faculties were formed and started to function. These were the Faculties of History, Linguistics, Law, Geology and Geography, Physics and Mathematics and Biology. In 1945 the Faculty of International Relations was formed and functioned till 1953. In 1957 the Institute of Russian and Foreign Languages was joined to YSU as a separate faculty, which was again separated in 1961. In 1959 the Faculty of Physics and Mathematics was divided into 2 separate branches. And on the basis of this in 1975 the Faculty of Radiophysics was separated from the Faculty of Physics, which in its turn had been separated from the Faculty of Physics and Mathematics in 1959.
In 1991 YSU had 17 faculties which provided 32 specializations.
1960-1990 became a period of unprecedented development for YSU. New faculties and scientific laboratories were opened. One of the most important achievements was the foundation of the Armenology Center. Publishing started its active functioning. Scientific researches of our staff, magazines and journals, periodicals and collected works were issued.
The period of 1995-96 became significant for the university with the beginning of new educational process.
In order to have an educational system corresponding to international standards YSU as well as a number of Armenian Educational Institutions adopted the two-grade system of education (bachelor's and MA degrees).
By now approximately 100 000 students have graduated from YSU. About 20000 students study at 19 faculties of this HEI. The educational process is conducted by more than 1600 highly qualified specialists and experts (207 professors, 581 associate professors, 375 assistants, 453 lecturers). 15 academicians of NAS RA and 19 associate members of NAS RA are also involved in the educational process of this higher education institution. Owing to highly qualified scientists significant researches related to different modern scientific branches are implemented at YSU. The educational and research activities are organized at more than 100 chairs, which are periodically replenished with modern techniques and equipment.
Since 1920 the scientific library has been working at YSU. It is high-quality university library with the book fund of 2 million samples. The fund of ancient and rare literature-20770 units is separated in the library. Annually the fund is replenished with 710 000 units, serves 12 000 readers, 9000 of which are students.
For more information visit www.ysu.am