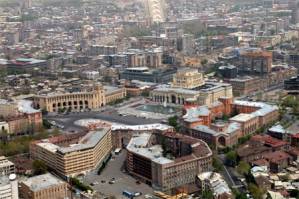 Yerevan is the capital of the Republic of Armenia.
Yerevan is a legal entity, has got the right to property and other ownership rights. Yerevan has a budget, as well as the seal with the coat of arms of the Republic of Armenia and its name. The local self-governance is Yerevan is based on the statutory principles determined by RA Law “On local self-governance” providing proportional development of all administrative districts of Yerevan.
The administrative boundaries of Yerevan are determined by the RA Law “On the administrative territorial dividing”.
Yerevan self-governance bodies are Yerevan Council of Elders and Yerevan Mayor. Local self-governance bodies work at their seat located at 1, Argishti street. By the decision of the Council of Elders, the Council can carry out its activities (including holding session) in other places too.
Territorial administration in Yerevan is conducted by the RA Ministry of Territorial Administration. By the decision of the Government certain functions of territorial administration in Yerevan can be delegated to other bodies of the executive power of the republic.


The territory of Yerevan is 233 sq km, the population is 1075.1 thousand people.
Yerevan is located in the northeastern part of Ararat valley, on both banks of the Hrazdan river, on the altitude of 900-1200 m above sea level.
The climate of the city is continental: hot and dry summers and relatively cold winters.
Yerevan borders on Ararat, Armavir, Aragatsotn and Kotayk marzes (provinces) of Armenia.
Yerevan is divided into 12 administrative districts: Ajapnyak, Avan, Arabkir, Davtashen, Erebuni, Kentron, Malatia- Sebastia, Nor Nork, Nork-Marash, Nubarashen, Shengavit and Kanaker-Zeytun.


The Armenian kingdom of Van - Urartu, or Biainili, was formed in the 9th century B.C. in the basin of Lake Van in the Armenian Highlands. King Arameh was the founder of the state. The kingdom of Van was one of the most developed states of its age.


During the 5th year of his reign, in 783 BC, King Argishti I founded the fortress-town Erebuni, present-day Yerevan, which became one of the most important administrative and economic centers of the country. The year of Erebuni foundation is accurately known from the survived cuneiform record inscribed on the stone slab. It says, “In the greatness of God Khaldi, Argishti, the son of King Menua,has built this impregnable fortress and called it Erebuni for the power of Biaina land and the horror of enemies. Argishti says: The land was unpopulated, and here I have done great work. In the greatness of the god Khald, Argishti, Menua’s son, powerful king, the king of the country of Biaina, the ruler of the city of Tushpa".

The name of the city of Yerevan goes back to the period of Urartu and originates from the name "Erebuni". It is known from the Urartian studies that the Urartian sound "B" sounds like "V" in Armenian. Thus, the name Erebuni has been transformed and has become Yerevan.