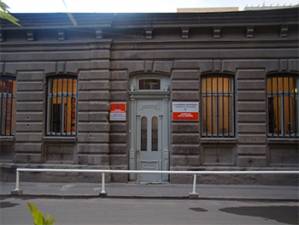 The choir “Little Singers of Armenia” was founded in 1992 with the assistance of the Department of Culture of Yerevan Municipality. Children from Yerevan and districts of Armenia participate in the choir.
The choir takes active part in the cultural life of the Republic touring with numerous charity concerts in Armenia, Russia, Europe, Africa, America, Asia, Australia. The “Little Singers of Armenia” choir and its soloists took part in various international contests, festivals, global symposiums, expositions including in Basel,(Switzerland, 1995), Hong-Kong and Beijing (China, 1999), EXPO 2000 (Hannover, Germany), “Golden rook” (Sochi, Russia,2001), “Dimitria” (Thessaloniki, Greece,2002), in the Sixth World Symposium for Choral Music (Minneapolis, USA, 2002)in the annual Armenian-American choral festival “The Unity of Song” (Armenia,2004,2006).
In 2001 the choir was awarded with the honorary title of “The Ambassador of the Culture of Europe” by the European Federation of EU Choirs”, in 2002 the World Federation of Choral Art recognized the “Little Singers of Armenia” one of the best choirs of Europe. The choir was awarded with the high prizes of the RA Prime Minister and the RA Ministry of Culture. The European Academy of Nature Sciences awarded the choir with the silver medal “Leonardo Da Vinci”.
The choir performs concerts under the leadership of eminent conductors, takes part in important state programs such as “Days of Armenian Culture in Russia”, the concert in the Kremlin Palace in the honour of “The Year of Russia in Armenia”, the concerts dedicated to the Days of France in Armenia (“Armenie,mon amie”), the concert “Aznavour and his friends” held in Republic square in Yerevan, the concert in Garnier opera within the frames of the “Year of Armenia” in France, the concerts in Sofia within the frames of the “Year of Armenia in Bulgaria” (2010).


Children’s Philharmonic after Yu. Bakhshyan was founded in 1994. The Philharmonic has an ensemble of folk instruments, a pop-symphonic and chamber orchestra, brass bands, a choir, a dance group, classes of vocal and guitar.
Since 1935 the Children’s Philharmonic has performed both in Armenia and abroad. In 2001 it took part in the festival dedicated to the 1700th anniversary of Christianity adoption as a state religion in Armenia and was awarded with “Grand Prix” and “Golden Eagle” prize.
Since 2002, the Children’s Philharmonic has organized “Golden pipe” festival in which schoolchildren from Yerevan and the RA marzes take part. In teamwork with the department of culture of the Municipality of Batumi it has been holding the festival of song called “Children of Armenia for children of Adjara”. A festival of Spanish dances was organized as well.
The Children’s Philharmonic also performed charity concerts nearly in all orphanages and asylums of Yerevan and Armenia. Within the frames of the “State support of marzes” program of the RA Ministry of Culture the CP gave concerts in the provinces of Armenia