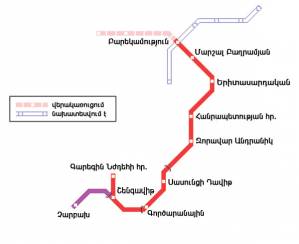 One of the symbols of Yerevan is “Yerevan Metro after Karen Demirchyan” which is already 42.
In 1966-1970, the urgent regulation of passenger transport was one of the vital problems of the capital. The problem was caused by the unprecedented growth of population in that period.
In accordance with the new general plan of Yerevan worked out in 1962-1964, the Underground was seen as the most effective public transport means and it conformed to the concept of the city development.
The permission for the construction of underground express train was received in 1971; later, in 1977, it was decided to be turned into the construction of the metro. Thus, designers started their work and builders joined them afterwards.
The solemn opening ceremony of the Yerevan Metro was held on March 7, 1981. 5 stations were put into operation:
“Barekamutyn” (“Friendship”) – architect Feniks Darbinyan,
“Marshal Baghramyan” – architects Spartak Knteghtsyan, Albert Zurabyan,
“Yeritasardakan” (“Youth”) – architect Stepan Kyurkchyan, the author of the wall sculpture – his wife, Ruzanna Kyurkchyan,
“Republic square” – architects Jim Torosyan, Mkrtich Minasyan,
“Sasutnsi David” – architect Baghdasar Arzumanyan.
Later, the following stations were opened:
In 1983, “Gortsaranayin” (“Factory”) – architect Henrik Ghukasyan,
In 1984, “Shengavit” – architects Romeo Julhakyan, Suren Burkhajyan,
In 1986, “Garegin Nzhdeh square” – architect Levon Gevorgyan,
In 1989, “Zoravar Andranik” (“Andranik the Commander” – architects Romeo Julhakyan, Suren Burkhajyan
and in 1997, “Charbakh” station was opened, architect- Valter Mnatsakanyan.
Currently, “The Yerevan Metro after Karen Demirchyan” has the railway with the length of more than 12 km, 10 stations, the number of wagons is 32 which makes up 71,1% of the anticipated rolling stock.
The Underground provides transportation of more than 20 million passengers per year.
In 2021, 18 million 573 thousand 710 passengers made use of the Underground; in 2022 this number was 23 million 317 thousand 633 people.

The reforms anticipated within the first stage of the program have been completed.
As a result, the completely damaged bogies of 30 main carriages were replaced with new ones (60 units); technical trains were purchased, 34,6 km of new cables have been installed, the pump stations were fully restored (76 pumps), some other renovations and modernization were carried out as well. Besides, some savings were made, so it became possible to renovate and modernize 8 carriages.

- 8 more wagons were renovated and modernized (completed),
- supply of fire equipment (completed),
- drafting, supply and assembling of training system for machinists (completed),
- drafting, supply and assembling of the equipment provided for washing the wagons (completed, currently the automated washing area is successfully used in accordance with determined schedule)
- Prolongation of the drainage tunnel and restoration of tunnels are the most important component of the second stage so as the drainage tunnel has been left uncompleted since 1998. The drainage tunnel is to be prolonged by 1km as well to provide water discharge in the area between “Zoravar Andranik” and “Republic square” stations as it is abundant with underground waters. (the process is in construction).
The aim of implementation of the mentioned component is to lower the level of underground waters and to direct them to the Hrazdan river through the constructed tunnel. This way the destroying impact of water on equipment operated in tunnels will decrease.
Due to the amounts saved during the realization of the second stage it became possible to modernize 6 more wagons so their number starting from the beginning of the program reached 24. This process will be continued till the last wagon will be modernized.
During the annual summit of the Reconstruction and Development Bank, which was held on May 19, 2019 the program of Yerevan Metro restoration was considered one of the best projects in the region.
In 2012, 15 million was allotted to realize the second stage of the program (EBRD and EIB allotted 5 million state loan each, and EU NIP gave 5 million grant). Within the framework of the second stage 12 carriages were renovated and modernized, a teaching centre for machinists was set up, various anti-fire equipment was purchased, a washing station for wagons was purchased and installed.
The main and most large-scale component of the 2nd stage is the prolongation of the drainage tunnel and restoration of tunnels). In 2015, a contract was signed between Yerevan Metro and “Agazos” company to fulfil drainage activities. According to the contract the work was supposed to be completed in 2017. However, the company failed the implementation and was exposed penalties to compensate the damage. Yet, it should be noted that in the period several objective reasons brought to the situation with unfinished obligations.
Drilling activities were completed in 2021. Anti-corrosion actions and filling of hollows were implemented as well. There are still some drainage activities to be fulfilled. The completion is scheduled for the middle of 2023.
Prolongation of the drainage tunnel will make it possible for the Metro to improve the quality and operation time of important infrastructures. Due to construction of the drainage tunnel the Yerevan Metro will annually save approximately 200 million AMD.
Besides the problems solved within the first and second stage of the program there are some other problems which were fully or partially solved in 2021-2022.

The construction of the 11th station of Yerevan Metro was planned in the Soviet period. It remained only on paper for many years. Currently, the city authorities are eager to fulfill the project. The competition for the design was held and the winning company is “Metrogiprotrans”. In 2023, the project will be ready and it will pave the way to announce the construction competition. Trains will get to Ajapnyak from “Barekamutyun” metro station through two tunnels towards the gorge. At that spot the construction of the 152-metre metro bridge is to be fulfilled.
This fast, safe, uninterrupted and eco-friendly transport kicks off a new stage after forty years .