National Academic Theatre of Opera and Ballet after A. Spendiaryan 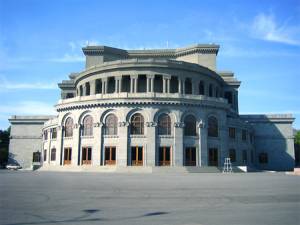 In 1927, in the State Conservatoire of Yerevan by the initiative of its director A. Ter-Ghevondyan the opera studio was founded and with the staff of its choir (R. Melikyan, S. Melikyan), its symphonic orchestra (A. Adamyan) and its soloists the National Opera Theatre was founded by the Armenian Government decree in 1932. It was opened with the performance of opera "Almast" by A. Spendiaryan on January 20 1933. By the initiative of the musical director of the Opera Theatre R. Melikyan in 1935 the opera by A. Tigranyan "Anush" was staged on the specialized stage for the first time. From the very first day of its existence the creative staff of the National Opera Theatre of Armenia initiated creation of characters in accordance with national and their own principles of stage and performance arrangement. Before its 10th anniversary, in 1939 the Theater had a great success in Moscow on the stage of the Bolshoi theatre. In 1940 the National Theatre of Opera got the magnificent new building designed by the great Armenian architect A. Tamanyan. This building is one of the most beautiful constructions in Yerevan. The Moscow success was repeated in 1956 on the days of the second decade of Armenian Art and Literature. This time there was performed the first national opera "Arshak" II» which was first staged in 1945. The Opera and Ballet Theatre has its unique role in the life of Armenian public. Preserving the heritage of our older generations the Theatre is faithful to its ideology: to show Armenian art lovers high level of culture and to educate a new generation for which this theatre will become a place of vital significance.