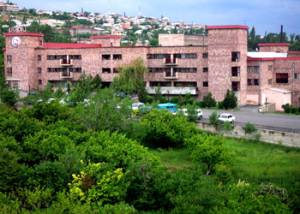 "Nork Marash" MC was founded in 1993, on the basis of the department of heart diseases and rheumatology of the former “The second chldren's clinical hospital”. The service of children's heart surgery was started in June, 1994. Thanks to the financing of American all-Armenian fund, 150-170 children with heart natural defects were operated yearly, and since 1996 grown-ups have been operated as well. A cardiological clinic for the grown-ups has been formed. During the first 5 years the surgeon of the centre Hrayr Hovakimyan who at first was in Armenia six months a year, operated about 350 grown-ups and children. By the support of French charitable organization “ASAF” many cardiologists have been trained in France. In parallel the children's cardiologist Hrayr Garabedyan (Spokane heart centre, Washington, USA) with professional stuff visits Armenia every year to do intracardiac interventions and to support the new service.

Heart surgical service was already famous in the area. The increase of the patients who need an operation and the absence of such kind of centres in neighboring countries dictated increasing of the staff and improvement of conditions.
The former “The second children's clinical hospital” totally changed its specialization and was renamed becoming “Nork-Marash” MC of cardiology and heart surgery. In 1998-1999 it became the only specialized centre of the area, where many patients from Georgia, from the south of the RF, Middle Asia and other places were operated. According to the contract signed with the children's fund of the RF every year during the following 5 years 12 children from post-soviet countries were operated on charitable basis in the centre. The specialists of the mentioned countries were taking 4 month advanced training courses in the centre by the financial support of American University of Armenia. In 2001 the president of the RA during his visit to Turkmenistan included the director of “Nork – Marash” MC Lida Muradyan in the staff of the delegation. An agreement was achieved on free operation of 5 children yearly and free training of specialists of Turkmenistan.

"Nork – Marash" MC now serves the population of our country and maintains regional significance. Today the centre has about 450 workers including general 30 doctors, 31 surgeons and cardiologists, 180 nurses instead of former 37 workers.

The main constructional units of the centre are:

These structural units are rearmed with modern technics . In X-ray – surgical angiographic cabinet (catheterization laboratory) 3 coronarography points act instead of 1 laboratory. About 2000 patients pass coronarography yearly, 600 of which are closed intracardiac (invasive) operation.

About 6000 children are examined yearly in children's cardiologic clinic: 200 children with inborn problems are operated in the same centre. Intrauterine diagnostics of high risky pregnant women’s foetus is done, as well as diagnostics and treatment of elderly people with inborn defects.
The centre is equipped with modern intra-arterial equipment. The MC provides examinations of 14000 elderly people yearly, about 800-900 of them are operated in the department of heart surgery of the centre. Heart surgery service is provided with high qualified specialists and saturated with new equipments, the quality of service corresponds to the international standards. Besides heart transplantation all kinds of operations of different levels of complications are performed. The results of about 800 yearly surgeries correspond to European and American standards.

The department has 80 beds today instead of previous 10 beds with all the conveniences for post-surgical care.
Rossi surgery, considering to be a hard one, is done in the clinic, which used to be performed only in leading clinics of the USA and Europe.
The surgical form (off by pass) without extracorporeal circulation has been introduced, which saves patients of several risky groups from the probability of infarction.
Post-surgical 6 months term insurance is used, during which all the examinations including the future interventions in case of necessity are done free of charge.
Operated patients' middle bed-day is 10-12, and mortality percent, including high risk groups is 3.8-4%, which is the lowest threshold of these indices.
Special program has been worked out which serves the patients arrived from other countries: department of international programs which provides medical future advice, as well as information about transfering, meeting, accommodation of the patients and other problems.
“Nork-Marash” MC is the base of the professions of cardiology and heart surgery of Health National Institute and Medical University. The specialists of the centre are regularly retrained in leading clinics of the USA and Europe, take part in the international professional conferences and seminars. Weekly conference culture – Journal Club is formed in the centre, pathanatomic conference, scientific discussions regularly take place.
It's programmed to found vascular surgery science, thanks to which patients with diseases of large vessels will be treated by intracardiac or surgical methods. Within the frames of this program the leading vascular surgeon of Royal Prince Albert Hospital of Sydney (Australia) Raffi Kasabyan twice a year visits the centre to perform vascular surgery. Mr. Kasabyan trains Armenian specialists in Australia to provide that service in our country.