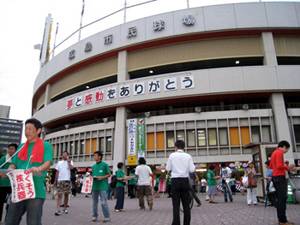 The motto is "We need to abolish atomic weapon before it destroys us".