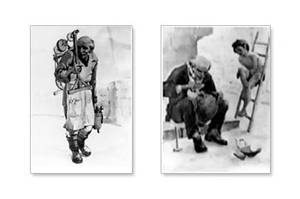 In his book entitled “The historical monument to Armenian oblast”, the eminent scientist and traveler I. Chopin referred in details to the economical life, lifestyle of old Yerevan, outlined the crafts and activities of the Armenians living in Yerevan. In that book he described in details approximately 70 crafts.
According to I. Chopin, there were a number of factories in the city during his visit. Actually, they were not factories as we now understand it, but they were workhouses or workshops with about a dozen of workers. There were many so-called “ducans” where a one or two persons were working-a master and an apprentice.

Three factories were the most important ones: the glass plant, the cannon foundry plant and the gunpowder plant. The cannon foundry and gunpowder plants were located in Yerevan fortress, under the direct control of the Sardar. As for the glass plant, it was a backward enterprise manufacturing low-quality greenish glass goods.
I. Chopin also mentioned the leather workshops which were mainly located in the canyon of the Zangu river, as a lot of water was needed for leather processing. Dye shops were in the canyon as well. Besides, there were water-powered mills and rice processing shops. Their total number was 9.
On the other outskirt of the city there was a separate quarter called “shilachi” where worked those workers who painted clothes red. Red paint covered the surroundings and the area was badly polluted. Later this quarter was involved in the territory of the city.

There were other smaller workshops in the city as well. A man rented the basement of the Aragovs in Kond quarter and made soap there. Shaving powder was sold there in small round cardboard boxes. The owner of the workshop bought boxes with shaving powder, mixed it with water to make soap. The workers who mainly consisted of teenage children had to cover their faces with handkerchiefs while working as there was horrible smell and dust. When the mixture became dense and then solid it was cut to pieces and sold.

The centre of the city called the Shahar outstood with abundance of “ducans” which were lined in rows in Astafyan street. Such rows were also situated in the Ghantar where the complex of trade houses was built later nearby English park. Various stalls and workshops could be found here: tailors. Hat makers, barbers, jewelers, forgers and so on. There was a place for horse shoeing near the market. Numerous caravanserais which served not only as inns but also had trade shops were located in this area. For example, :Gyurji’s caravanserai” had 62 shops and stalls, “Julfa’s caravanserai” had 36 stalls.

Many workshops were piled in Charkh street: coffin makers, carpenters, joiners.
There were many workshops of shoes makers and “pinachi” – repairmen.

Besides, there were vending craftsmen who moved from quarter to quarter with their tools. They repaired pottery, carded wool and provided did other work.
Among “free craftsmen” of old Yerevan were porters and woodcutters. The place of gathering of porters was at the walls of the hospital of Spandaryan street. They would sit here and wait for an employer. Woodcutters came prior to winter with their saws and axes.
Special attention drew vending knife sharpeners. They moved with their sharpening stones fixed on special wooden holders. The stones were operated with wheels. Children and housewives rushed to bring their knives and scissors to have them sharpened. Children particularly liked to watch the sparkles coming out from under the rolling stones when metal touched it.

There were also craftspeople who worked at home. Among them were carpet weavers who crafted wonderful pieces of carpets using their simple tools. Some of such tools are kept at the Yerevan History Museum.
Silk making was once spread in Yerevan as well. People used to pick mulberry leaves and arrange them in their basements. Caterpillars appeared from tiny eggs, devoured the leaves and passed all the stages of the biological circle which lasts 22-30 days. When the grown caterpillars span their silk cocoons, silk makers preserved a number of chrysalises for further breeding, and used the empty cocoons already abandoned by butterflies. They put them into hot water and started spinning silk threads from them.
There were also honey bee breeders in old Yerevan, particularly in Kond. With the coming of spring the air fragrant with the smell of flowers and blossomed trees was filled with the buzzing of bees. It was not an easy work for townspeople as they had to take the hives to the mountains where there were lots of flowers. That is why bee breeding wasn’t so spread in old Yerevan.