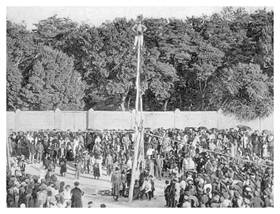 The Circus Art in Armenia has a long history.  We have little information on the ancient circus games in the Armenian historiography. Yeznik Koghbatsi (5th century) mentioned the performances with trained animals, and David Anhakht (5-6th centuries) mentioned the scarecrow standing on the rope which was operated with strings.

A number of circus games were spread in Armenia: animals fighting, people’s battles with animals, rope-walking. The tradition of animals fighting was often sponsored and held by clergymen (for example, bullock-fighting in Echmiadzin), and the rich made donations to the church. The bibliographical data and traditional realities present ancient and medieval Armenian circuses as theatres.

A new skillful circus in the Armenian reality was founded in 1846, in K.Polis. Being called “Aramyan theatre” it successfully worked in Tiflis and Yerevan. The leader of the group was a wrestler performing difficult tricks Hovhannes Gasparyan who was called «New Hercules» for his incredible strength. This new circus group which was a great success in K. Polis in 1848, before about 100000 spectators performed a group show describing a scene of fire  standing on the rope of 20 m high and 100 m length. This complicated and witty trick eclipsed the fame of the groups arrived from Europe and Persia.

In the summer of  1850 the group of H. Gasparyan arrived in Yerevan temporarily residing in Tsakhi meidan (yard) not far from Gyurji caravanserai. On the day of public watch Yerevan looked very festive. The circus square was covered with colourful carpets with  Armenian ornaments. The art lovers of those times were sure that the newly-created group cold be rightly called Armenian circus not only because the performers were Armenian but also because almost all the tricks had national spirit.


Finally, after difficult attempts the scene of fire was performed which in fact became a significant event in the life of Yerevan residents.
The performance of juggler Nazi Shira was also significant, whose performance was accompanied with national dances. Besides, he performed dressed in national Armenian clothes. So, the Armenian circus became viable: the best tricks were included in the collective circus programs of the groups going on tours.

The aim of the State (Armenian) circus was to develop the best traditions of the Armenian circus and to create performances satisfying the aesthetic requirements of modern spectators and having national character. In 1961 the collective was called “Yerevan” rewarding the title of the Honorary collective of Armenia, and in 1974 it was called "Erebini" The collective went on tours to Czechoslovakia, Poland, Hungary and in other countries. The valuable contribution to the history of the Armenian circus was made by the talented clown L. Yengibaryan (in 1964 he won in the International contest of clowns in Praha), by equilibrists G. Grigoryan, N. Manukyan, juggler S. Petrosyan (since 1985 – the chief director of the ASC). Today the Yerevan Circus keeps the previous beautiful traditions.