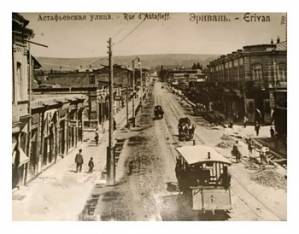 The industrial development and population growth brought to the creation of urban transport. Before the horse-drawn tram, transportation in the city was carried out by porters and carriages which moved without any schedule and cost much.The number of carriages and carts was less than 100. At midnight and on festive days the fares doubled.

On October 4, 1901 engineer-mechanic Arshank Babayan submitted the drafts agreements on the construction of water-supply system and the horse-drawn tram to the city department. On Ma2 1903 the city Duma affirmed A. Babayan’s agreements. It was decided to start the construction activities from 1904. But later, because of some circumstances the contract was handed to the wife of engineer Vasil Mirzoyan-Maria Mirzoyan who took to work. According to Mirzoyan’s project, the length of Yerevan horse-drawn tram  line was to be 4 verstas and be comprised of two parts: one part to join the railway station and “Kantar” (the market), the other to join “Kantar” with Astafyan street (now Abovyan street) up to the building of the court.  On September 17,1906 the Astafyan line of the horse-drawn tram was put into operation, and on December 11- the railway segment was put into operation as well. So, the construction took 2 years.

The horse-drawn tram was a covered carriage with 5-6 rows of long seats which moved along rails. The entrance was from the side. In the front part sat a coachman and in the back part sat a conductor. From the front and behind the tram had torches and bells attached. The number of passengers was limited to 20. The carriages were small and bulky, the tram moved uncomfortably and slowly, that’s why it worked without profits.

However it worked properly till August 1918.  A model of a horse-drawn tram, tickets for it and photos are kept in the Yerevan History Museum as a historical recollection of our capital city.