Functions of the department 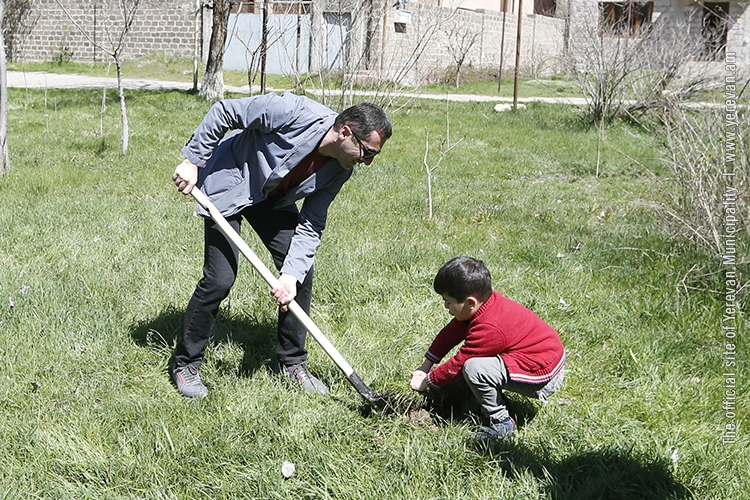 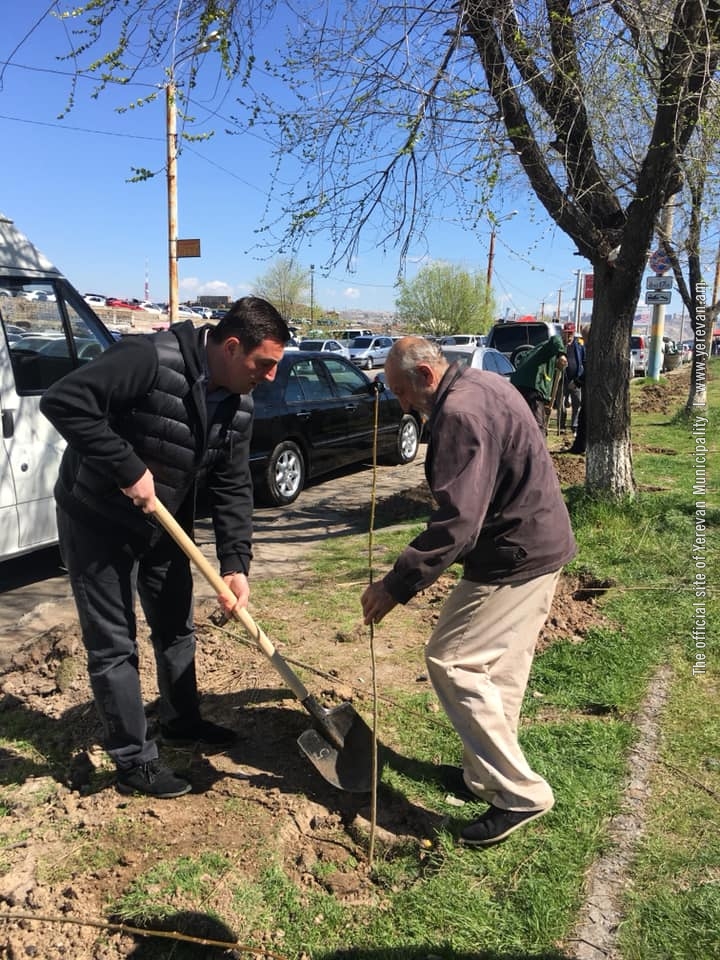 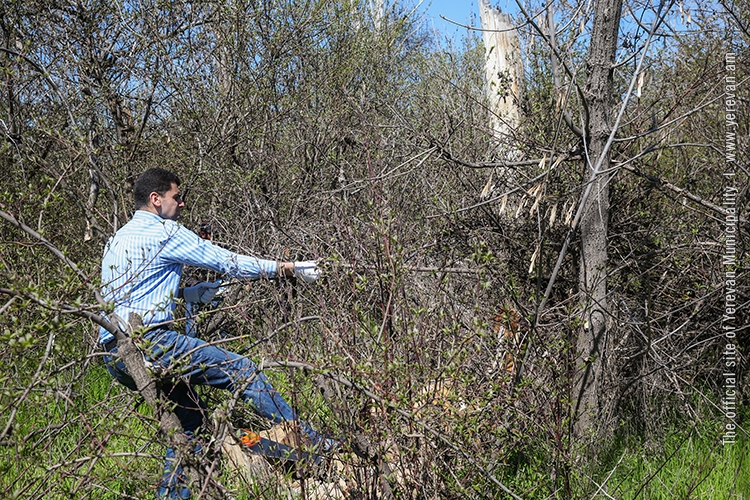 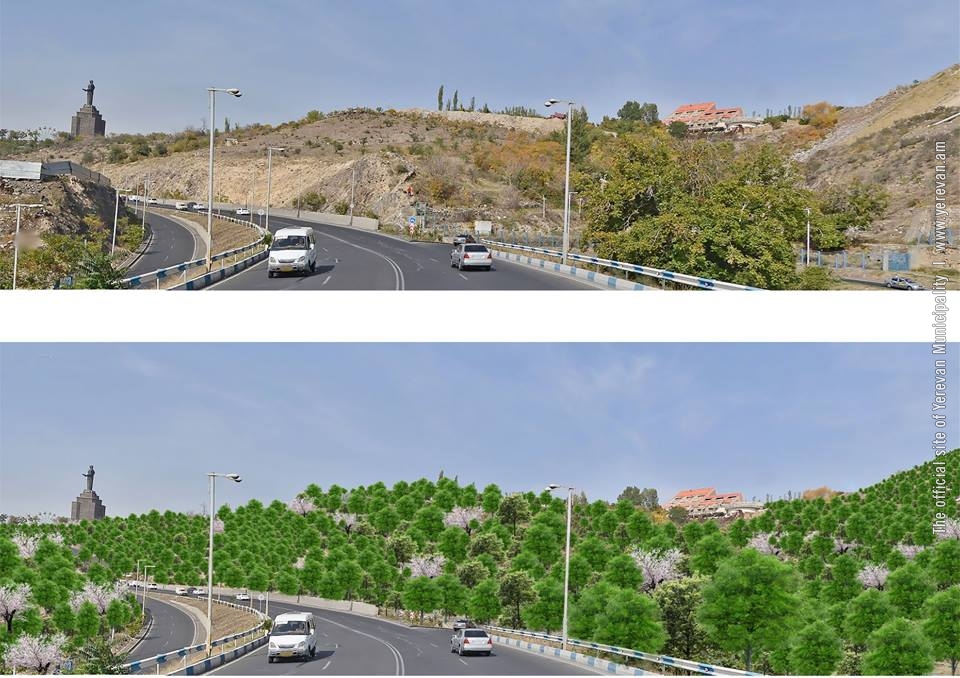 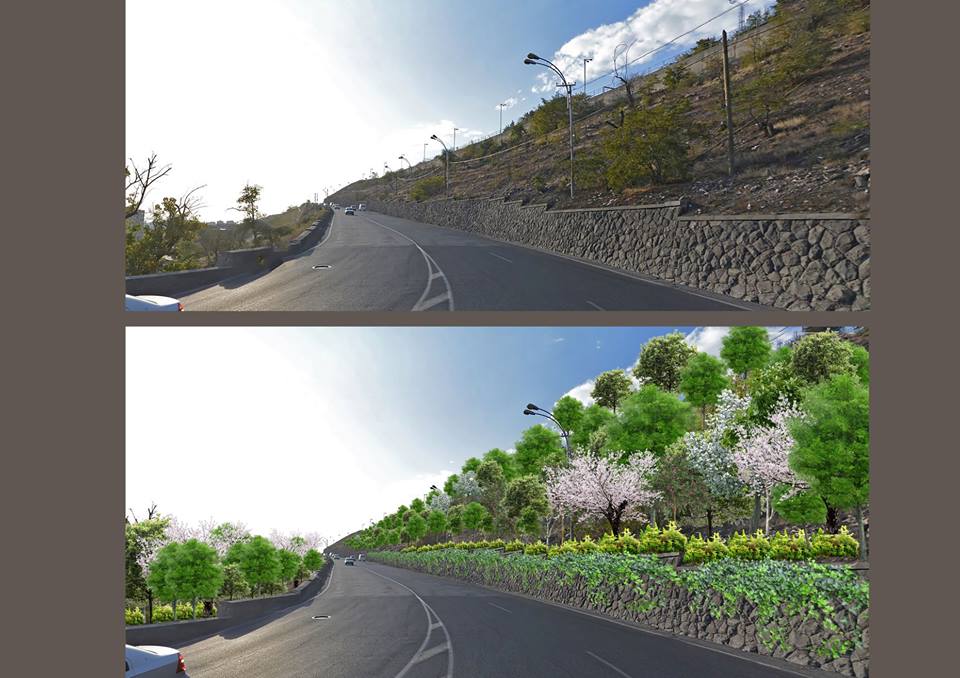 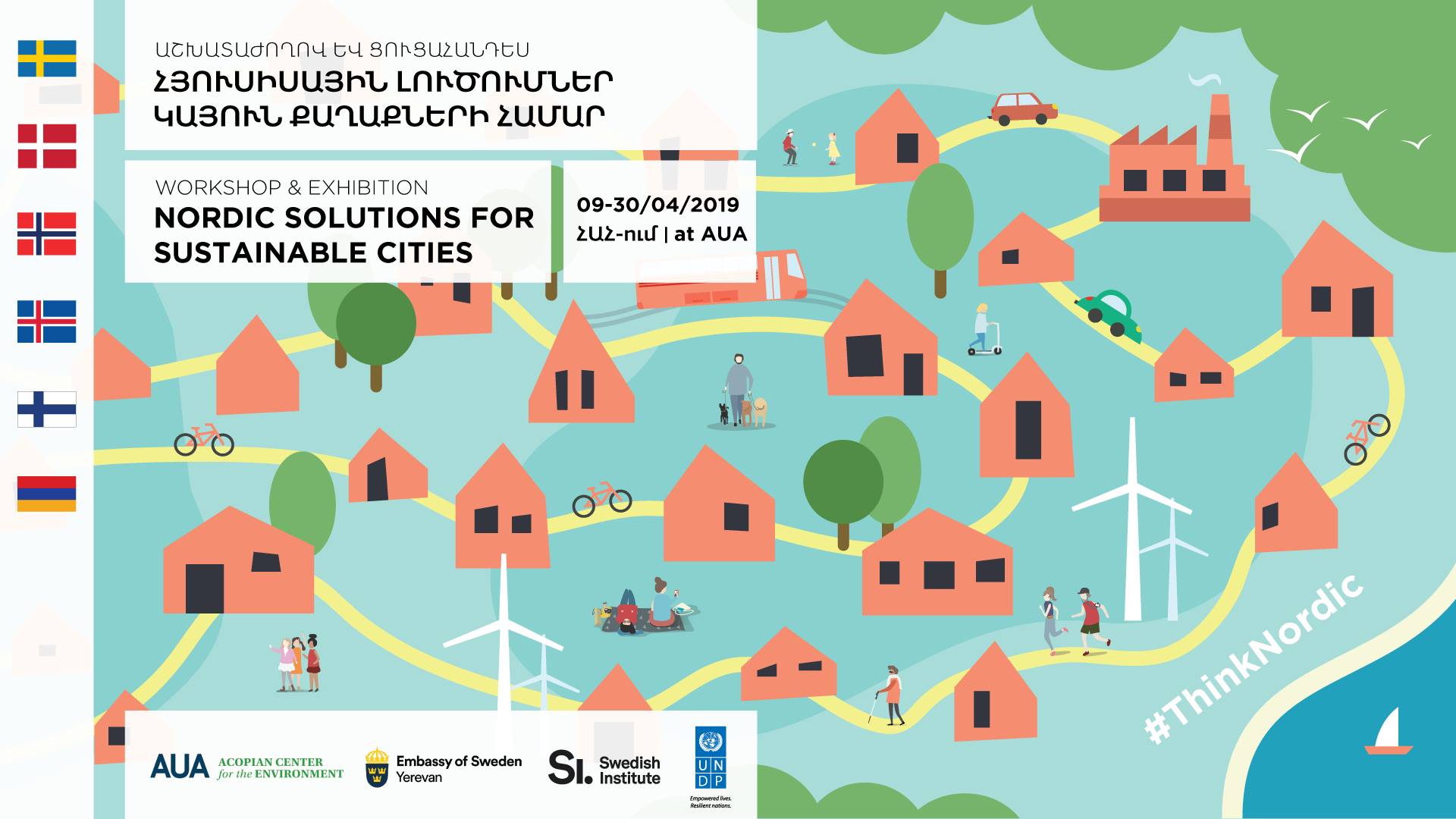 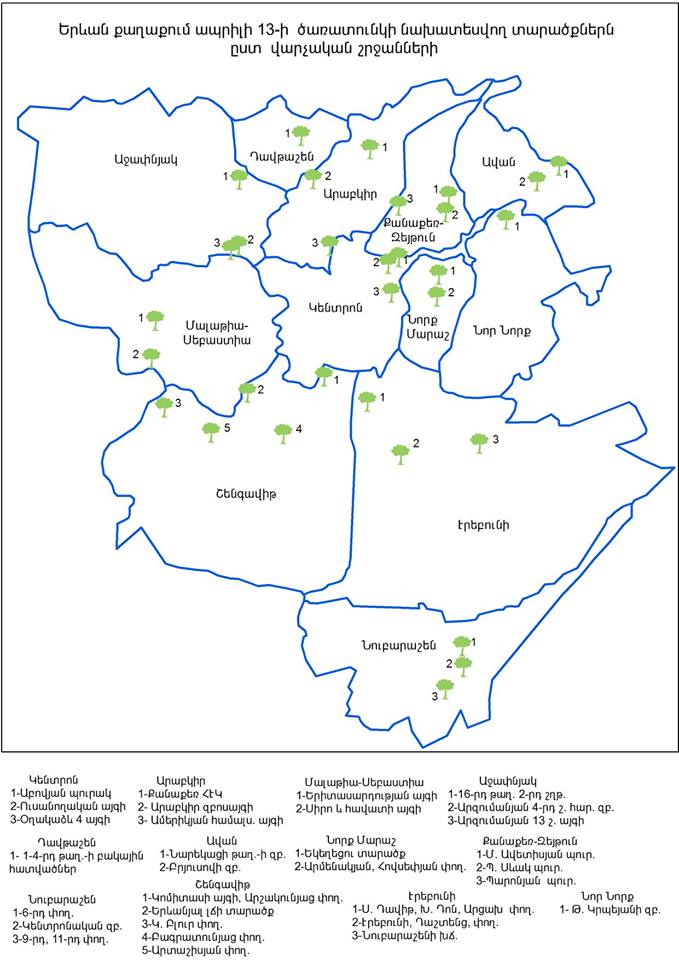 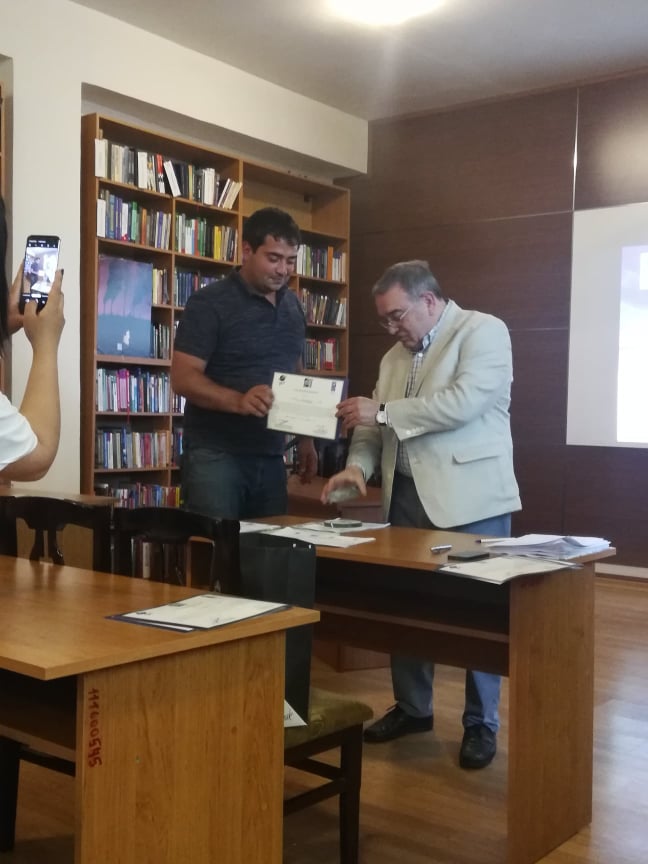 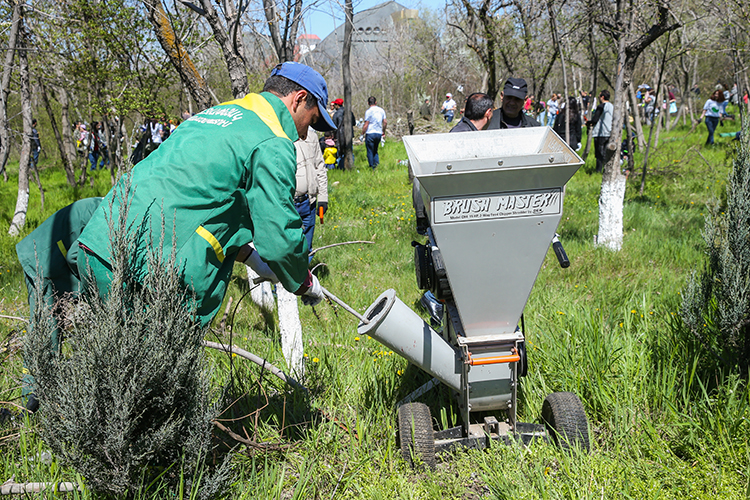 The capital’s green look will change: new approaches in the field of landscaping

A new image, new approaches-Yerevan has adopted a firm policy in the sphere of landscaping programs. The head of Yerevan Municipality Department of Nature Protection Khachik Hakobyan presented the programs provided in the field of landscaping in 2019 and further years. Accordingly, new standards will be used for tree planting in the streets of Yerevan: 2-3-year-old trees with the trunks of at least 4-5 cm in diameter are to be planted only in the areas with irrigation systems. New irrigation systems are to be installed in parallel. This year it is planned to build a new irrigation network of about 5 km. Within the period of 5 years 500 thousand trees are to be planted in Yerevan not only in streets but also in forest zones and parks. In particular, trees are bushes are to be planted in the area of 20 hectares adjacent to the dump of Nubarashen. In the future it is planned to expand the borders of the zone so as it will cover the area of the dump after its conservation. The green look of the city will change due to planting new blooming trees and bushes and new sorts of flowers.

It is planned to develop vertical landscaping on walls, overground passages, balconies and other parts. The silver fir-trees to be planted on the occasion of Yerevan’s 2800th jubilee are to be kept in special areas till specialists decide that they are able to survive in their new places and only then they will be replaced in their permanent areas. According to Kh. Hakobyan,it is important for the city to have its own precious sorts of trees. Thus, green house and plant nurseries are to be developed. Currently, the community has 20n hectares of nurseries including 600 sq m of green houses. Pruning of trees will be implemented with a new approach as well. The pruned branches and wood are to be used in landscaping.
Yerevan is going to refuse applying liming of trees unnecessarily. The new road segment connecting Davtashen to Ashtarak, as well as the area adjacent to Monte Melkonyan highway will be landscaped. Trees and bushes are to be planted in the areas of renovated kindergartens, schools, public areas. The areas of the Hrazdan gorge and Yerevan Lake are to be cleaned up. 8500 cubic meters of soil is to be brought to Yerevan and the soil area will be covered with lawns. The policy of the authorities related to the area of the Opera is firm as well. Instead of cafes a new park will be built in the small centre. ! hectare of green zones will be restored with new design solutions and precious sorts of trees. The process has already started.

Trainings on environmental themes for community and civil employees

Nearly 350 employees of Yerevan Municipality have participated in the trainings on environmental themes. The initiative was carried out within the frames of the UNDP “ Generate Global Environmental Benefits through Environmental Education and Raising Awareness of Stakeholders” program. The program is financed by the “Global Environmental Facility” (GEF) and co-financed by the UNDP. The goal is to enhance the country’s facilities to use ecological education and awareness as the tools for nature resources management for developing the skills of stakeholders. The representatives of local bodies of self-governance, state administration and private sector took part in the trainings. The First Deputy Mayor Hrachya Sargsyan, the resident representatives of the UNDP in Armenia Dmitry Mariasin, the First Deputy Minister of the RA Irina Ghaplanyan, the Deputy Minister of the RA Teritorial Administration and Development Lilia Shushanyan, other officials were present at the initial meeting of the program.
The training course was provided on May 14-17 in the RA Academy of State Management by the specialists of American University of Armenia. To estimate the efficiency of the training the participants passed tests at the beginning and at the end of the course, and get certificates afterwards.

The fir-trees presented to the capital on the event of Yerevan’s 2800th anniversary by Ostalb district are under permanent care of the city dendrarium. The delegation of the Baden-Wurttemberg region, Schwäbisch Gmünd city and Ostalb district delegation invited to Yerevan on the 2800th anniversary event of the city made its special present for Yerevan. The aim of the action was to make a memorable present for the city. The symbolic 2800 fir trees will be kept in the city dendrarium for a while to get adapted and then replaced to the public areas of the city.

More than 8000 trees have been pruned

The spring tree pruning lasted from March 5 to April 25. More than 8000 trees were pruned in Yerevan. According to the head of the department, deep pruning was applied only to damaged and over 60-year-old trees. Wherever possible the badly damaged trees are applied recovery actions such as special nutrition and treatment. Instead of dried trees new ones are planted.

During the citywide tree planting Action held on 13.04.2019 pruning was organized in the area of 17 hectares o Tsitsernakaber and Saralanji forest zones. The First Deputy Mayor Hrachya Sargsyan and employees of the administrative districts took part in the activities. The pruned branches were cut down on the sport and replaced.

Citywide tree planting action on April 13: 7500 trees and bushes have been planted

On April 13 a citywide tree planted action was organized during which 7500 trees and bushes were planted. The green zones of the central streets and squares have been replenished with new trees. The tree planting actions are carried out only in irrigated areas. Different organization and numerous residents participated in the action.
On April 22, on the event of the Earth Day Yerevan Municipality together with the “National Water Cooperation” scientific and ecological NGO organized a tree planting in the park at Shiraz 4/3 of Ajapnyak district.
After dismantling the cafes near the Opera, the area will be improved and landscaped. Then an open tender will be announced for bring the area to its final look.

Stray dogs are not a business anymore: the Municipality creates its own centre for animals’ neutralization

Stray dogs have become a real problem for townspeople. Numerous alarm calls are received via the hot lines of the Municipality. To solve this problem the Centre for Neutralization of Stray Animals has been created.
The centre will have its own vet clinic and a shelter. International experience is to be used in the capital. The specialized cars will bring animals to the centre, where specialists will examine the animals, vaccinate, treat and sterilize them. The dogs will stay in the shelter from a few hours to a few days and then they will be chipped and fostered or set free in the same areas.

The aim of the Centre for Neutralization of Stray Animals created by the decision of the Mayor of Yerevan is to solve various problems related to stray animals. The problems are to solved in cooperation with the specialists of the sphere and international and local NGOs engaged in the field. The animals are to be collected, replaced, get initial examination, vaccinated, sterilized, chipped and kept. Besides,the statistics, mapping, identification and care of stray dogs are carried out. Before the construction of the clinic is over, the activities are carried out by a number of vet clinics.
According to the studies, the number of stray animals in Yerevan reaches 15-20 thousand. This year it is planned to sterilize 4500 female dogs of 6000 ones, or 75% of them.

Department of Nature Protection of the Municipality of Yerevan